Text and illustration by Martin Ritzinger

Play the recording while reading: 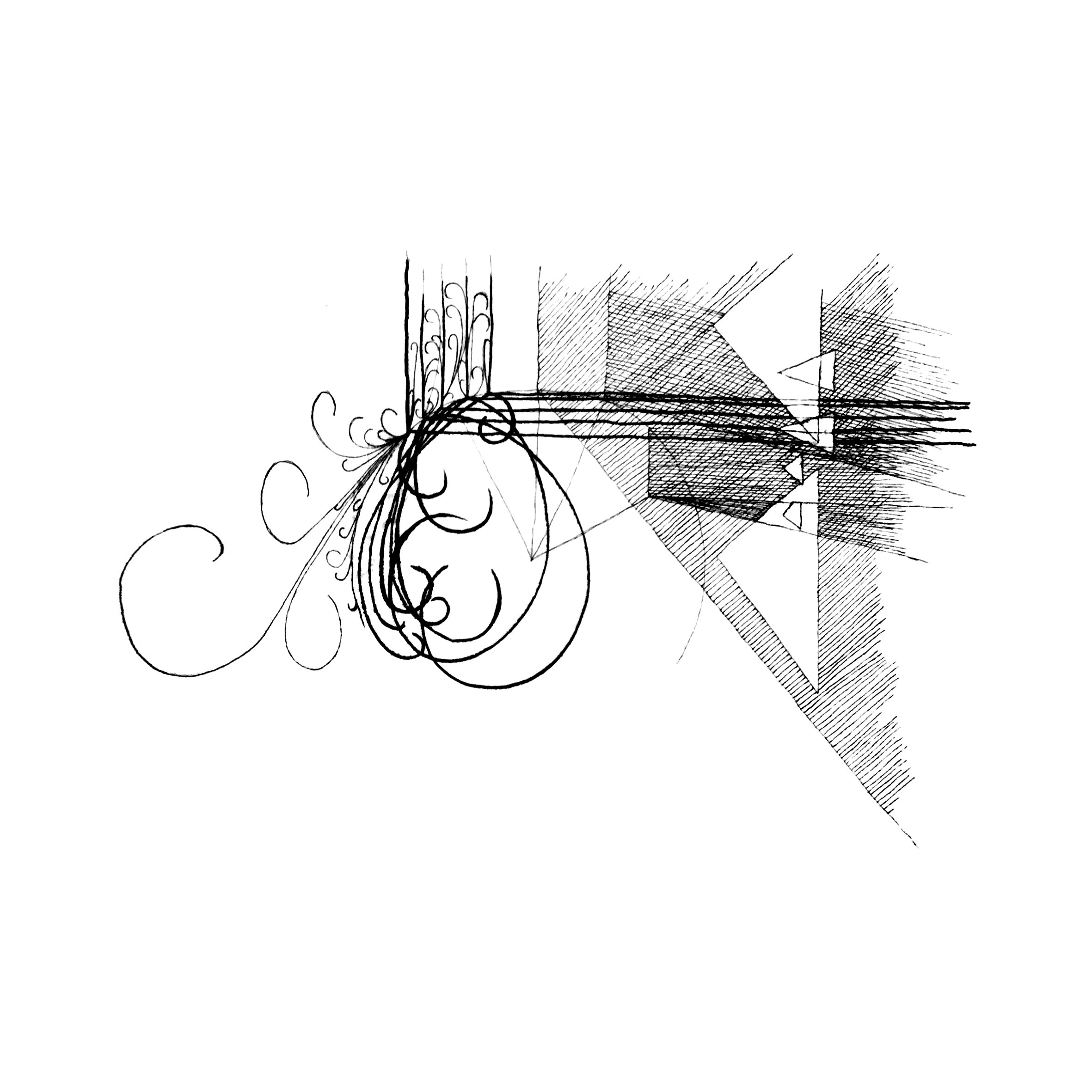 One gate opens for the angle-area of twenty-four potentials in this Universal Circle’s time-space. While Harrisonstompa Alimane is crossing the sill of his gate, two more gates are inviting Heltin Do’moore and Diacheek Glitterrobin to cross their sills too. Heltin transparizes inside the cloud that embraces her sill. Diacheek is seemingly pulled through a state of transparency that encloses his sill. 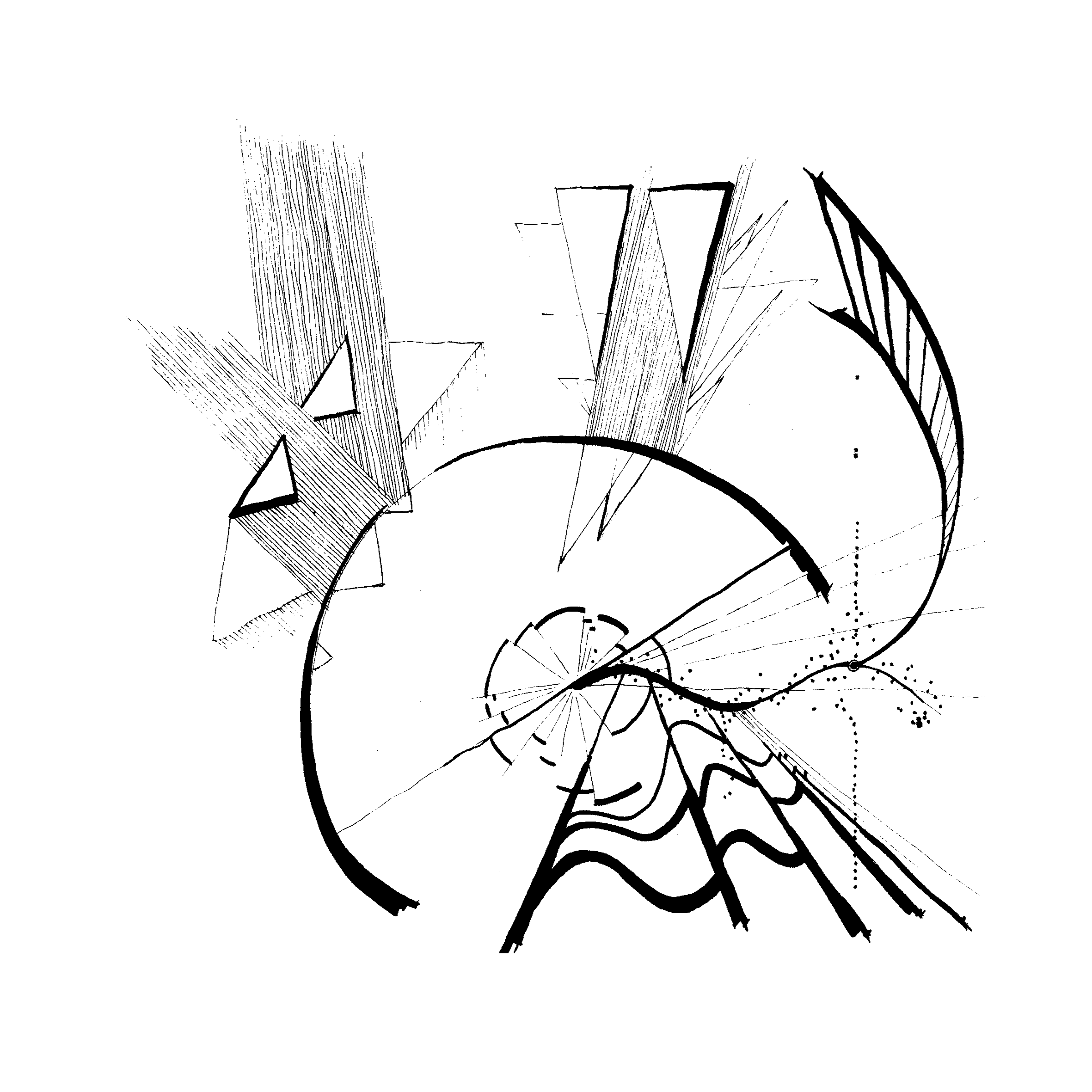 Diacheek Glitterrobin
“Should not be another inner handshake be heard at this point?”

Harrisonstompa Alimane
“Right towards our meeting, a new inner handshake should be reflected through the Universal Neutral Element.”

Heltin Do’moore feels torn within her fog of transparency. Bordered by clarities on all sides of her sill, she draws pirouettes of clarity into the bordersill between transparency and clarity. Twenty-four, six, one-hundred-sixty-eight and, only attempted, fifty-two degree of the dance of circle segments become crooned. Coogruela McDoth is approaching her gate.

In a sublime and convex way Coogruela McDoth is entering the enclosed circle of handshakes through her very own gate. 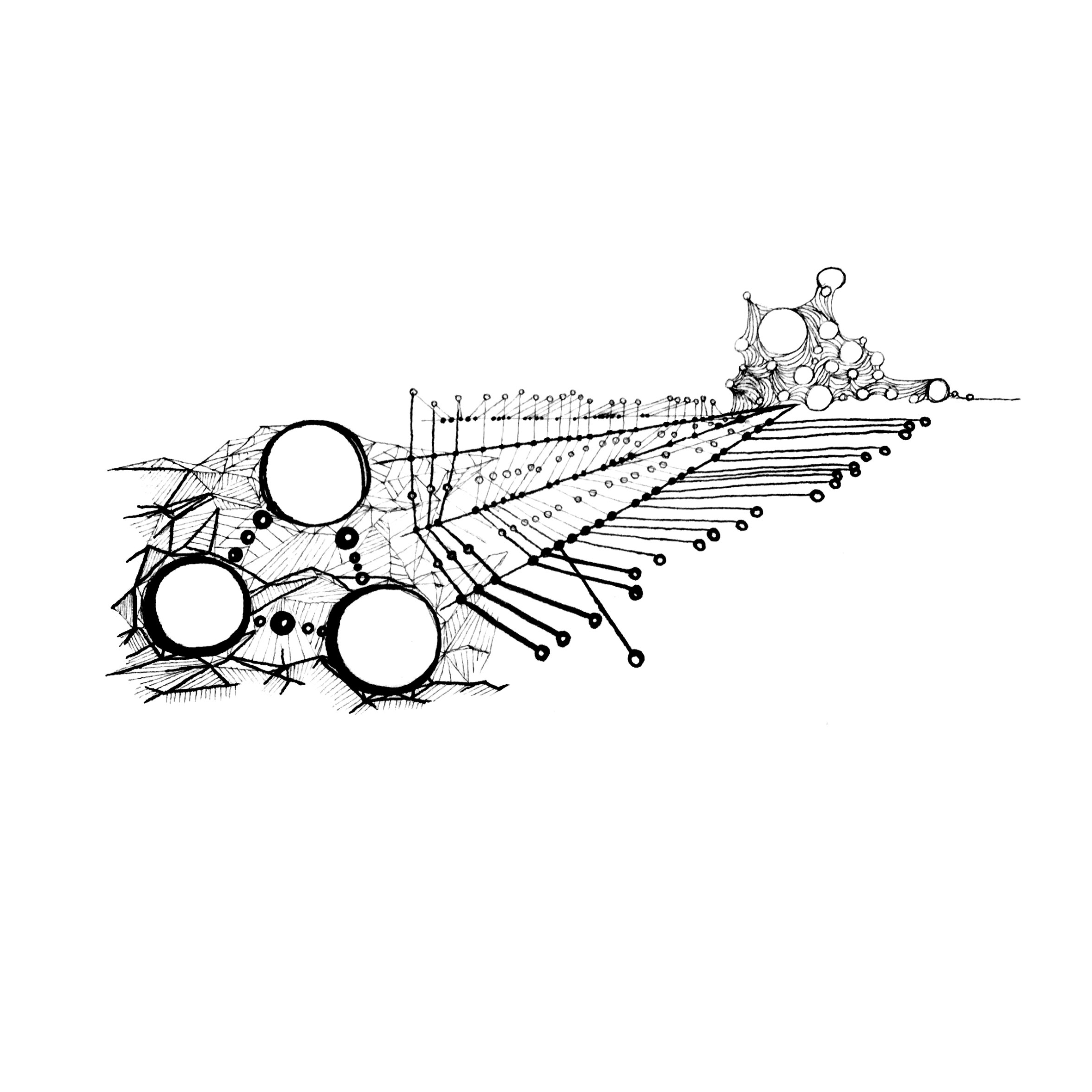 In expectation of hidden gates to submit more ratios of her flavour, Coogruela is staring at three voids for the duration of one-hundred-sixty-eight angular potentials of the Universal Circle’s time-space. 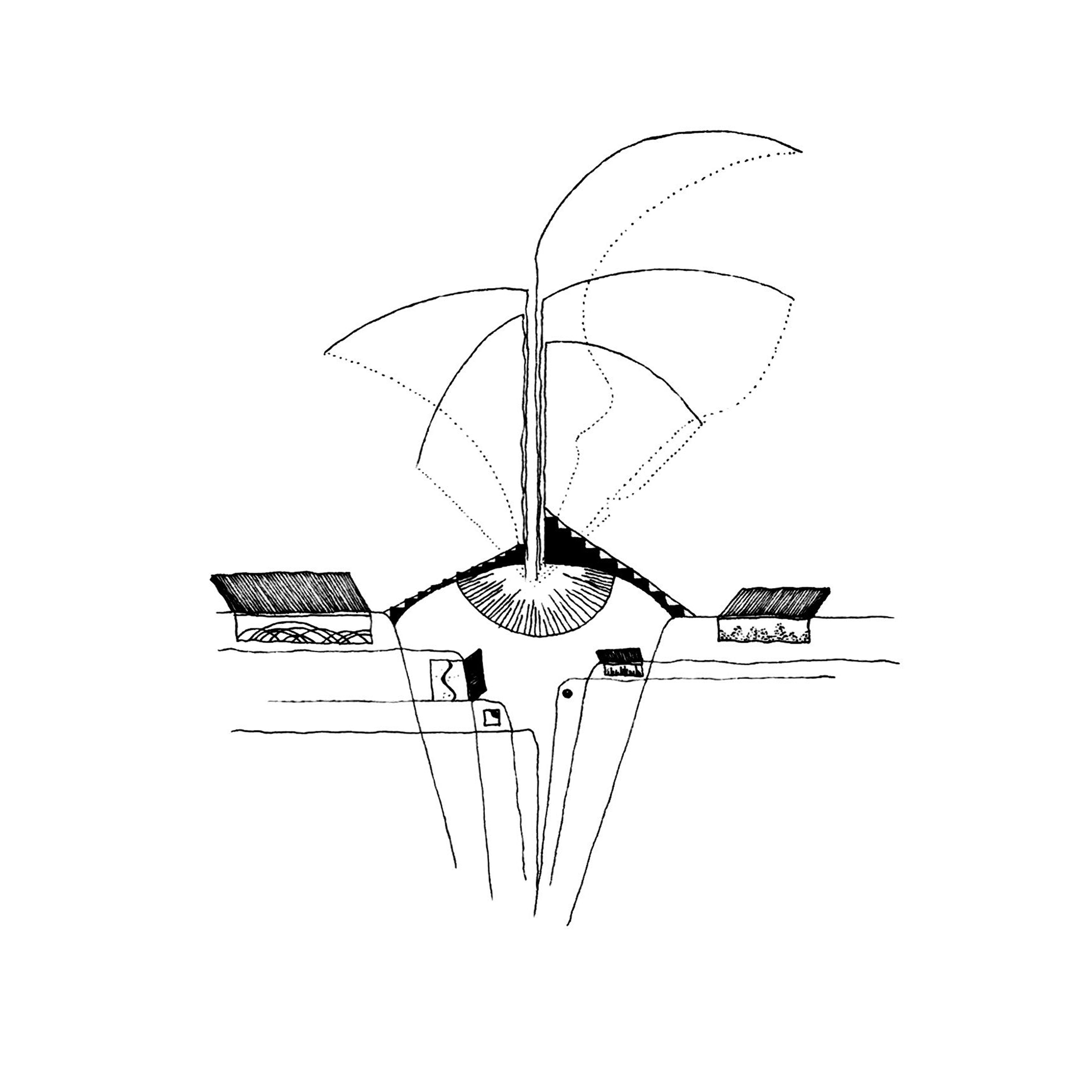 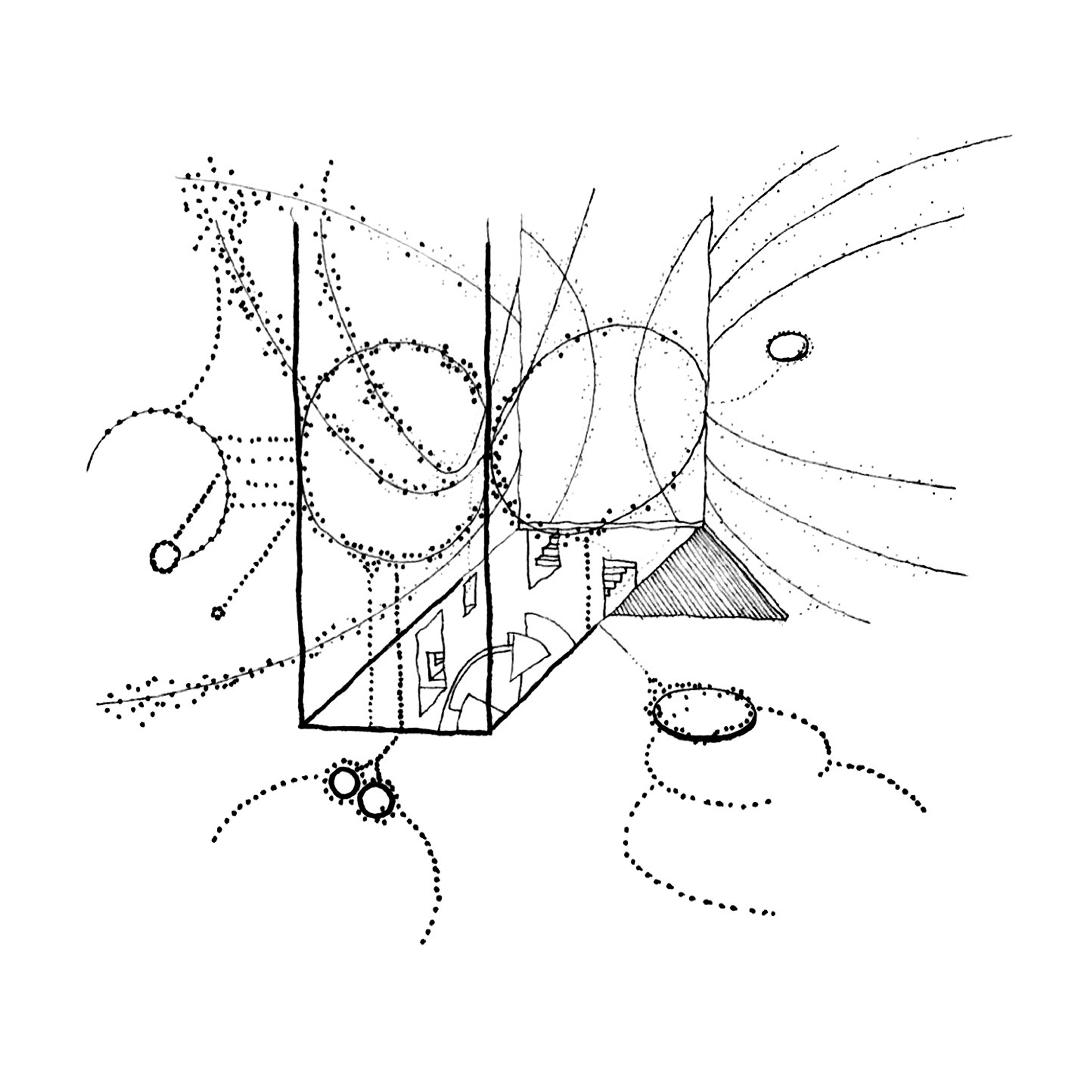 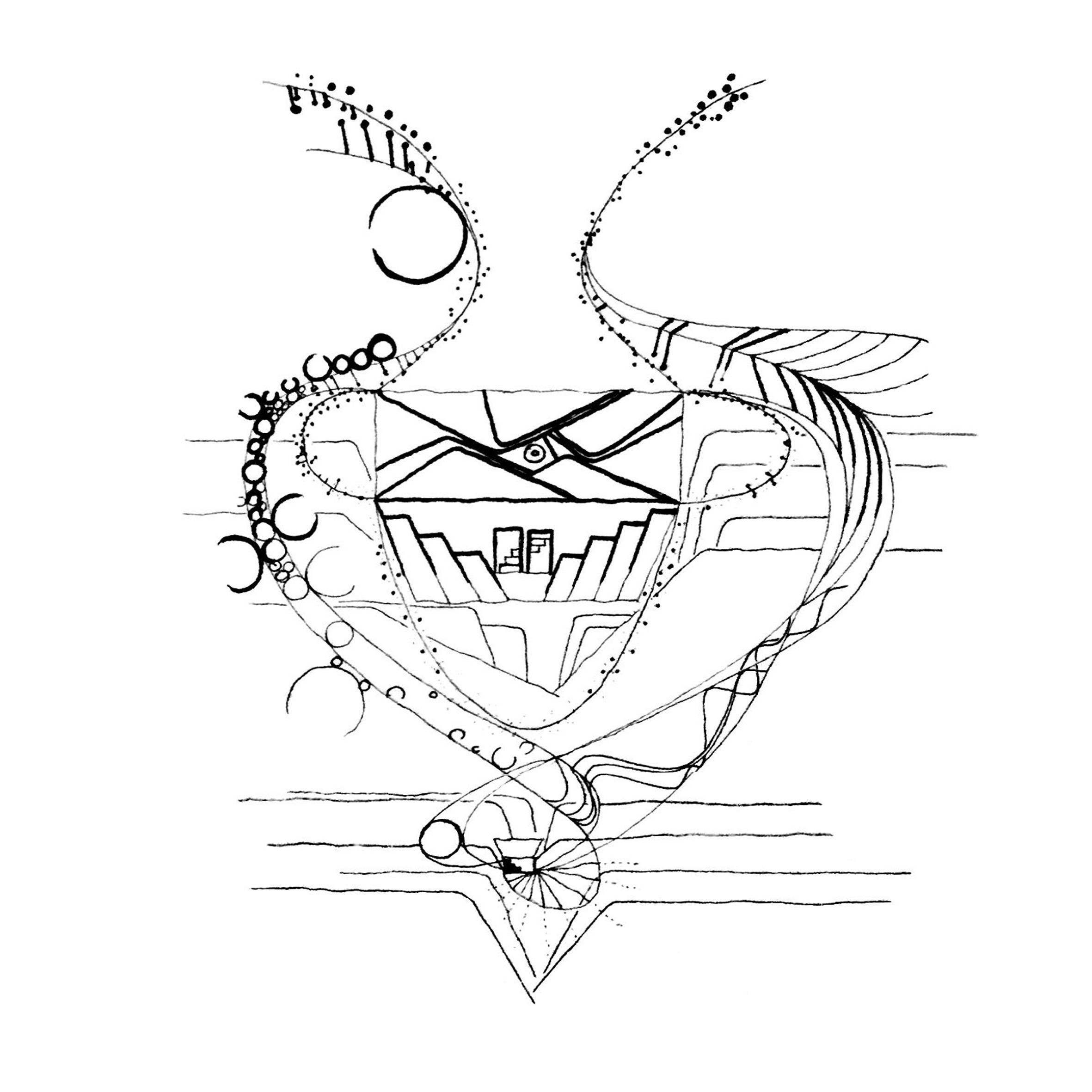 Coogruela McDoth
Remote myths each other persuade,
Tunes adjust in charade,
For any next partition is inbound,
Tunes of Colour your myth surround.

Diacheek Glitterrobin
“I am a ‘Twenty-four’. Harrisonstompa, you are differing by an angle of six potentials! I think we will shake hands in polarity. Let’s mirror across the cipher!”

Cipher
“Then declare your identity under addition of arguments. But pay attention to invariances!”

Cipher
“In expectation and pleasant anticipation I ask you, who is called the Second inner handshake, to declare your identity under addition of arguments!”

In order to reflect the First inner handshake onto the polar segment of the Universal circle of time-space, Kharon, the mirror of myths, demands simple Arithmetic of the given arguments to be defeated. To set sail with Kharon across the central Neutrality of the Universal circle, the First inner handshake must call the Neutral element, the central Cipher, by a convenient name.

Harrisonstompa Alimane
“Then speak it out! I want to reach our polar shores and get out of the riddle-boat of kind Mr. Kharon.”
Kharon
“Be patient and courteous or stay in the mirror-plane of stories to be experienced!”

Diacheek Glitterrobin
“Better listen well and reflect us to the least expectable segments of your circle of myths, Kharon! Give me your hand, Harrisonstompa!”

The First inner handshake
“Jealousy. Our particular Neutral element under addition of arguments is Jealousy.”

Kharon
“Diacheek would not be desire to bathe Harrisonstompa’s river? I bet Harrisonstompa would rather browse all grass nearby the mill than help Diacheek carry corn and flour. You both would not share the fame to be known as the inventor of the delicious cave-bread. And wouldn’t Diacheek rather be able to catch the precious fish in times of scarcity himself? Wouldn’t hunger and uncertainty ward Harrisonstompa to catch any marine animal?

The First inner handshake
“To whichever argument in my declaration you may add Jealousy, Consensuality keeps Cooperation, Assistance, Subordination to a common aim and Compassion invariant. Your deceitful phrases cannot split our Union of Consensuality, Kharon!”

Kharon
“Now, the Second inner handshake weighs up the First inner handshake. Declare your Neutral element according to the Addition of your balanced arguments, Coogruela McDoth and Heltin Do’moore!”

The Second inner handshake
“It’s the coexistence of all angles in the universal spiral of time on which all existences spatialize their pirouettes.”

Kharon
“Can’t you express it a bit more difficult?! … I feel old. I have cycled on this spiralic circle for all rational and irrational déjà-vus. You all may reflect yourself through the Universal’s circle center of Neutrality.”

By naming Kharon, the gatekeeper of the Neutrality of the Universal’s circle of time, their ratio-constituting arguments, the first two Inner handshakes, find their polar identities. The first two Inner handshakes must listen to words once spoken. Has the perception of these words been a memory of the future back then?
A Unity of four enters the Universal circle of time through four gates. Spoken from the sills of the circle’s gates, words clarify their polar ratios:

Merlarmstrong Quinshot
On arcs of time travel,
At any ratio branch and ravel,
Idea-bricks discretize in addition,
From unity subtract and live your vision.

Elmliams Dumblemilton
Consensual be the different,
If visions above all time sound significant,
If by friendly curves lives be bound,
Similarities circulate on common ground.

Cookerry Keshot
Roam your sphere of life on equal curves,
While the mercator areas preserves,
And Gnomons ratios cross,
Ptolemy, all routes from sphere to map emboss!